The Guardian’s phrase, not mine, but entirely true of Wednesday night’s young pianist who seemed to be playing from another world, far away, breathing a rarer, finer air than we mortals in St James.
Pavel Kolesnikov lived in Siberia until he was 18. When he emerged on stage, he seemed to be almost transparent – a slight, deathly-pale figure in black, pinned to the piano stool in a shaft of evening light against dark drapes that emphasized the defenceless nape of his neck, a tableau as monochrome as the keyboard.
The Brahms Intermezzo in Eb Major hardly disturbed our sense of frozen time. He started it painfully slowly, every pause a held breath: but building such a sense of fragile intimacy, one felt almost voyeuristic watching how he spun out each phrase, his half-closed eyes gazing upwards into the quivering air above the strings, while his fingers brailled their way across an undulating landscape of sound.
And then, somehow, we’d segued into Beethoven’s Piano Sonata No 4, without pause for applause, the continuity of key causing a retrospective jolt as our minds caught up. Clearly intentional, this re-framing both disconcerted and caused me to reassess a familiar piece by changing my expectations.
The sonata gave us a chance to experience a different facet of Kolesnikov’s talent. The emotional subtlety and range of the work demands exceptional intellectual and technical ability, and here I felt he moved effortlessly between the precise and playful, noble and gleeful, with a great sense of empathy that reflected Beethoven’s melancholy underlying the surface shimmer.
Post interval it felt as if he’d retreated further inside his own head. The second Brahms Intermezzo (Bb minor) is a soundscape of underwater ripples, and Kolesnikov seemed like an only child used to playing alone, smiling inwardly at his own thoughts.
This private agenda included flowing from Brahms to Couperin, again without acknowledgement. In so doing he left the audience a little adrift for the first few minutes: you could hear the cogs grinding as we tried interpreting Couperin as a stage in a Brahmsian emotional journey until, suddenly, he and we caught up with the formal dance steps of the Pavane, a pattern recognizable and familiar. But I for one enjoyed being discomforted; it helped me to hear the old with new ears. It challenged my notion of Couperin as a spry, courtly and ornamental composer: at times it felt as if Kolesnikov was improvising on his own, a boy alone in his room with a keyboard.
So it continued through the wonderful, individualistic Tchaikovsky and final Brahms Intermezzo No.3. We were superfluous on this idiosyncratic pilgrimage to truth. Weirdly, it felt like a privilege.
I’ve read that Pavel Kolesnikov’s private passion, outside of his music, is vintage perfumes. Now I’ve heard him perform, I don’t find this at all surprising.

Tom Hicks and friends (or, Guernsey Music Service does it again!)

a review by Julia Meredith Writing about young musicians is challenging.  What they have achieved is already so remarkable –…

by Julia Meredith Ingenue or Ninja?  (not really!) With her pale oval face, simple red frock and neatly-tied raven’s wing… 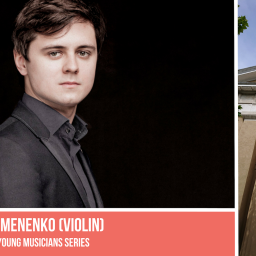